“It’s a bird! No . . it’s a bat!” It could very well be that both guesses are wrong. The diminutive night flyer, gliding from tree to tree on folds of outstretched skin is the most common mammal never seen by humans in North Carolina, so it is easily misidentified. The Southern Flying Squirrel is a small rodent with big saucer like eyes that occupies habitat similar to his larger cousins, the gray squirrel and the fox squirrel, however this itty-bitty squirrel is nocturnal, becoming active and feeding only at night while foraging on the ground. It weighs no more than 2 to 3 oz. and measures from 8 1/2 in. to 9 7/8 in., including a 3 to 4-inch tail. The Southern Flying Squirrel is the smallest of North Carolina’s 5 tree squirrel species. Its fur is a ravishing reddish brown or gray, although its belly is colored a creamy white. The most distinctive feature it sports is the cape of loose skin that stretches from its wrists to its ankles and forms a membrane, called the patagium, with which it is capable of gliding. The membrane is bordered in black. When the squirrel stretches its legs to their fullest extent, the membrane opens and supports the animal on glides of considerable distance. Although it is called a “flying” squirrel, it actually jumps and parachutes rather than flies! It’s amazing to catch a visual of them in “flight.” 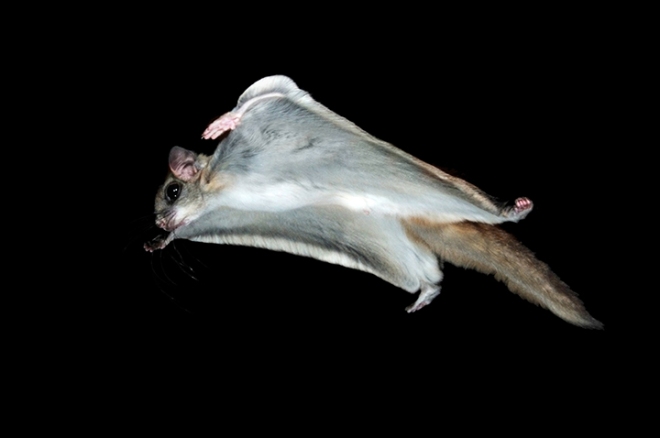 The gliding membrane billows up, and by varying the tension on the patagium and using its tail as a rudder (like the tail on a kite), the SFS can direct its glide around branches and other obstacles with remarkable agility, although it cannot gain altitude during a glide. However, it can make a sudden 90-degree angle turn in the direction of its glide. That fluffy little “multi-purpose” tail is also used for communication and thermal regulation. Although the distance they glide is usually short, the longest ﬂight on record was measured at around 200 feet. The ﬂying squirrel lands hind feet ﬁrst, head up and scampers to the side of the tree to avoid detection. The Southern Flying Squirrel is one of two ﬂying squirrels found in North America— the other one is the Northern Flying Squirrel. While both are found in North Carolina, the Northern FS is rare and found only at higher elevations in the western part of our state. Although a fairly quiet animal, flying squirrels can produce birdlike chirping sounds, but some of their vocalizations are not audible to the human ear. Preferred habitats for Southern Flying Squirrels include hardwood and mixed pine-hardwood forests. They require older trees with cavities that provide 11/2 to 2 in. in diameter entrances for roosting and nesting, and in winter these adorable squirrels readily gather in surprisingly large numbers. Tree cavities have been found with as many as 50 roosting squirrels. Because of their need for tree cavity habitats, they are a natural competitor for woodpeckers’ homes, and even though they are quite cute, they’ve been known to bully an endangered Red-Cockaded Woodpecker from its nesting cavity and take over the residence. Bluebird boxes are also quite attractive to ﬂying squirrels. Wildlife rehabilitators at the Outer Banks Wildlife Shelter in Newport get involved in the rescue and rehabilitation of this delightful, tiny squirrel when the little one chooses a cavity precariously close to a residence or possibly, even manages to enter a house. It’s not uncommon for Southern Flying Squirrels to find a cavity somewhere on a residential structure and make their way into an attic or a wall to find a perfect and safe dwelling to nest and raise babies, which some folks object to. Sometimes a tree is cut down before realizing it is home to nesting or roosting flyers. Tree cutters bring the homeless little gliders to the shelter to ensure they are cared for and raised properly for eventual release back into the wild, giving them that second chance we at the shelter are known for. When they are admitted, usually due to displacement rather than injury, we attempt to replicate their omnivorous natural diet as best we can. If very young, shelter staff will provide syringe formula until they are ready for solid foods such as meal worms, fruits, berries, flower blossoms, vegetables, seeds and nuts.

Nesting and breeding usually occurs twice a year; January-February and June-July. A typical nest will be lined with ﬁnely chewed bark, especially cedar bark in the east and grasses. Lichen, moss and even feathers will provide a soft bed. More than one nest is constructed as a necessary Plan B in the wild, because Mom will need to move her infants if the nest is disturbed by natural elements such as damaging weather or predator presence such as owls, hawks, snakes, bobcats, coyotes, raccoons, weasels, foxes and the common house or feral cat (which is the most prevalent and lethal danger posed to them). The average litter produces one to three young that weigh in at less than a quarter ounce each. The youngsters will open their eyes at four weeks and stay with Mom until she births her next litter. Although SFS are mammals and babies will nurse for about a month, they will be gliding and eating on their own by eight weeks. Unfortunately, Mom is on her own during this time, as males do not assist with the rearing of babies. It will take about a year for the youngin’s to mature before reproducing. Life expectancy for these cute little rodents is up to 13 years in captivity, but not more than 4 or 5 years in the wild. 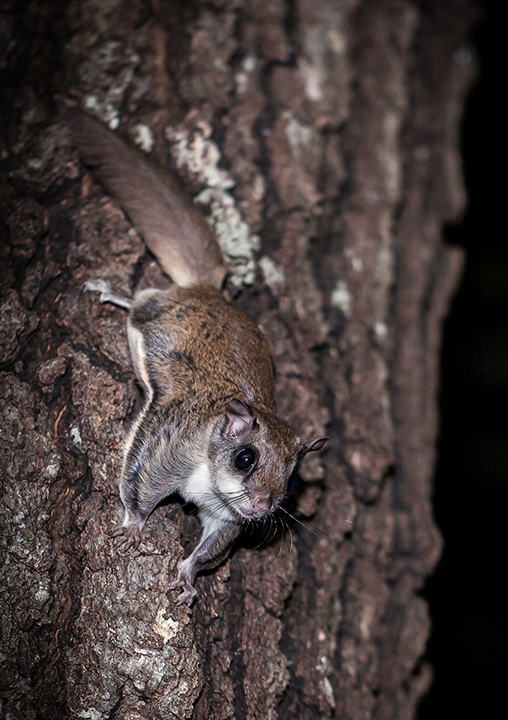 Flying squirrels are the oldest living line of “modern” squirrels, and fossil records date back over 30 million years. SFS are a nongame species and although not listed as endangered, we should still be mindful that their presence gives humans a better quality of life. Those cutie-patooties glide through the night feeding on a variety of insects and big ‘ole bugs that would surely be annoying to us during the day! So, if you find Southern Flying Squirrels have moved into your home or they are now homeless due to a tree ‘fell,’ please contact your nearest wildlife rehabilitation center or wildlife control officer for assistance, not just because they are cute, but because we need to protect and relocate our environmental partners!