Although the Northern Mockingbird, the only mockingbird found in North America, has a repertoire of 200 songs and is capable of singing over 1,000 songs an hour we, wildlife rehabilitators, don’t perceive that ability as a demonstration of happy or merry as one generally would, especially during the caroling season. Mockingbirds are made to mimic all birds they hear, as well as other interesting sounds. So when infant or juvenile mockingbirds are admitted to the Outer Banks Wildlife Shelter in Newport, NC during baby season, we’re not always sure who we’re hearing when we walk into the nursery. Mockingbirds are renowned for their mimicking ability, as reflected by the meaning of its Latin scientific name Mimus polyglottos, ‘many-tongued mimic.’ Behind every song is intent and purpose. As an infant, songs are meant to proclaim “feed me, feed me” time. Their favorite mimic in our nursery is of a Northern Cardinal; a high pitched, shrill sound (almost headache producing) that definitely gets our attention. They must be thinking that piercing sensation will put them in the feeding line first.

Mockingbirds can even imitate sounds such as squeaky gates, sirens, pianos and barking dogs so well that professionals engaged in acoustical analysis cannot tell the difference between them and the real thing. Males and females, who reach sexual maturity after their first birthday, sing both day and night as an essential part of mating, making their presence known, denouncing trespassers in their territory, attacking potential predators and menacing or mobbing anything or anyone, to include humans, they perceive a threat. The bird you see perched conspicuously on high vegetation, fences, eaves, telephone wires, a rooftop or on your mail box is probably a Northern Mockingbird on sentry duty, ready to fiercely swoop and flagrantly harass other birds, animals or people in defense of their self-assigned boundaries. Even on the ground, they will stretch their legs tall, extend their wings while hopping and prancing around an intruder in attempts to scare it away. 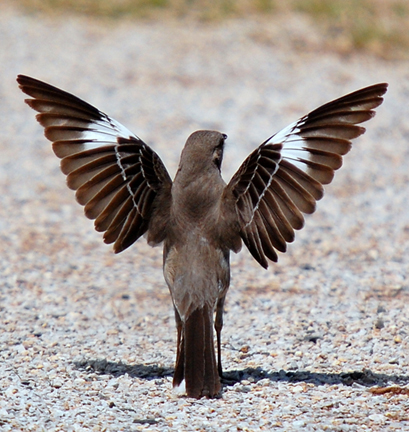 If a predator persists, mockingbirds will summon other mockingbirds from neighboring territories by vocalizing distinct alarms, calling them to join forces in attack mode. These birds are absolutely unafraid and will assault large, dangerous targets such as hawks and capable cats. They should feel no need to apologize for their aggressive behaviors, though. They need to be fierce given the long list of predators they must routinely deal with such as Sharp-Shinned Hawks, Screech Owls, Great Horned Owls, squirrels and snakes, just to name a few. You might think a bird predisposed with unabashed ferocity might be pretty big, but nope, they are medium-sized songbirds and a bit more slender than thrashers who are their closest living relatives. Males are slightly larger than females and their average wingspan is 12 to 14 inches. Most Northern Mockingbirds have a gray or white underbelly and exhibit white wing bars. They have small heads, a long, thin dark bill with a hint of a downward curve and long legs. Their wings are short, rounded and broad, making the tail seem particularly long in flight. The Northern Mockingbird is an omnivore, meaning it eats insects and fruits. The birds’ diet consists of a variety of insects, spiders, earthworms, berries, fruits, seeds and sometimes lizards.

Their favorite insects include butterflies, beetles, ants, bees, wasps and grasshoppers. Mockingbirds drink from puddles, river and lake edges, or dew and rain droplets found on plants. Adult mockingbirds also drink sap from cuts on recently pruned trees. Their diet heavily consists of more animal prey during the breeding season, but takes an extreme shift to fruits during fall and winter. The habitat they prefer is usually open areas, forest edges, grass lands for foraging, but they have adapted well to residential living. Northern Mockingbirds visit feeding stations, especially in winter where they dine on fruit, mealworms and suet. They often bully other birds away from feeding areas, even if it contains foods they do not like. They don’t share well. Mockingbird nests, constructed in bushes or trees usually 3 to 10 feet off the ground, consist of dead twigs shaped like an open cup, lined with grasses, small roots, leaves and sometimes bits of trash, plastic, aluminum foil and shredded cigarette butts which are not the best materials to choose, but they are resourceful recyclers. The male constructs the twig foundation while the female stands watch, then they switch duties and the female fashions the lining. In a breeding season, the Northern Mockingbird lays an average of 3-5 eggs. They are light blue or greenish in color, speckled with brown dots and hatch after 11 to 14 days of incubation. Both the parents will feed their little brood, and after about 10 to 15 days of life, the offspring become independent. You may see youngins still begging in the trees for food because it’s hard for a child to give up that free ride, and the parents will accommodate for a while, but soon tough love will encourage self-sufficiency. As they raise young and feed on insects, they’re paying attention and remembering everything that comes near their territory.

The mockingbird has the remarkable ability to tell the difference between individual humans, even after only 60 seconds of contact, despite changes of clothing. The Northern Mockingbird is known for its intelligence and is much smarter than bird experts previously thought. They rank right up there with the natural capacity and genius of the American Crow. These songbirds also recognize their specific breeding spots and return to areas in which they had greatest success in previous years. Although the Northern Mockingbird’s lifespan in the wild is 8 years, the 1800’s took them to near extinction because people, who valued their exceptional vocal talent, captured them for pets. When kidnapping them became illegal their numbers recovered significantly. The Northern Mockingbird, also called an American Nightingale, is the third popular state bird behind the Northern Cardinal and Western Meadowlark. In light of what we now know about this impressive and boldly assertive songbird, it might be easier to understand when all that fussing starts next Spring. Although it might sound merry at first, that bird is strictly talking business. Northern Mockingbirds need to do what needs to be done to keep us and any other threat moving along and away from their family. Isn’t that what we all do?