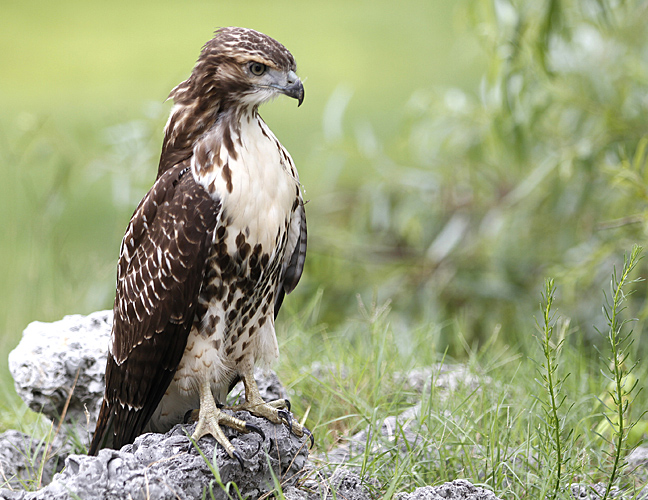 Calls started coming into the Outer Banks Wildlife Shelter in Newport weeks before the young Red-tailed Hawk was finally captured and admitted for care. The reports were all very similar. “I see this hawk sitting on the ground, for hours at a time, in the grassy area by a small stream right next to our building on Henderson Drive in Jacksonville. I can almost walk right up to it.” With each call, someone was dispatched to check out the situation. I went a few times and managed to get very close to the bird, who then flew away quite capably up and over the tree tops. The thought at the time was, she’s just hunting for snakes or toads along the stream. The business owners in the area and their employees enjoyed seeing the bird everyday and affectionately referred to their big bird as ‘Henderson Hawk.’ A day came when an employee called stating she was standing right next to the hawk, took a picture with her smart phone and sent it to me. It was, in fact a young Red-tailed Hawk, and standing next to one in the wild is highly unusual and potentially dangerous. I high-tailed it over to Henderson Drive and was able to walk up to the hawk, pick her up and place her in a kennel cab for transport to our shelter with no resistance, from the hawk anyway. People from the surrounding buildings emerged and walked rather hurriedly toward my car. “What are you doing with our bird or where are you taking our bird?” I explained to them that “it is not normal for me or anyone to be able to walk up to a hawk, let alone, pick it up. There has to be something wrong that needs to be diagnosed and treated,” I explained. They all understood and wanted what was best for “their bird.”
After a thorough examination at the Outer Banks Wildlife Shelter, the first year Red-tailed Hawk was found to be severely dehydrated and suffering from malnutrition. She was essentially starving. She should have weighed between 1100 – 1500 grams and was only 600. As you can tell from her ‘in the wild’ perched on a rock picture, her head was not well rounded, her eyes dull and sunken, and her emaciated chest could barely support her heavy, drooping wings. The theory is, she had not developed appropriate hunting skills. Mortality among first year hawks is around seventy percent and lacking hunting skills is one of the main reasons for that high percentage. In an outside, rehabilitation enclosure at our shelter, she is getting healthy and looking quite stunning with her fuller figure and intense, bright eyes.

Red-tailed Hawks are classified as Buteos, which are the largest of hawks. With a wing span of up to 56 inches, they are broad-winged and broad-tailed soaring hawks. They get their name from the rounded, rich, russet red tail they sport. A young hawk’s tail will be brown with dark color bands until they molt in their second year. They are carnivores and belong to the category of birds known as raptors. Their eyesight is eight times as powerful as a human’s, making it easy to spot their lunch of small rodents, rabbits, snakes or lizards, which comprises the bulk of their diet, from the air. RTH’s are opportunistic hunters and will snag just about any little critter moving on the ground with those sharp and deadly talons they use as weapons if hungry enough. In some areas of the country they are referred to as “Chicken Hawks.” When you hear a hoarse and raspy two to three second scream way overhead, it could very well be a Red-tailed Hawk letting you know she’s defending her territory or nest that may be close by.
Henderson Hawk is doing quite well at our shelter, has achieved her normal weight and is demonstrating behaviors indicative of the aggressive Red-tailed Hawk she is meant to be. She will be attending flight and hunting school in our large flight cage soon. When she graduates, she will be released to the wild, but she won’t be returning to the people and traffic concentrated area of Henderson Drive. Since Red-tailed Hawks are birds of open country, she will enjoy the wide open spaces of fields and woods one of her caretakers, whose last name is, coincidentally, Henderson, has planned for her.
Linda Bergman-Althouse
Author of “Save Them All”