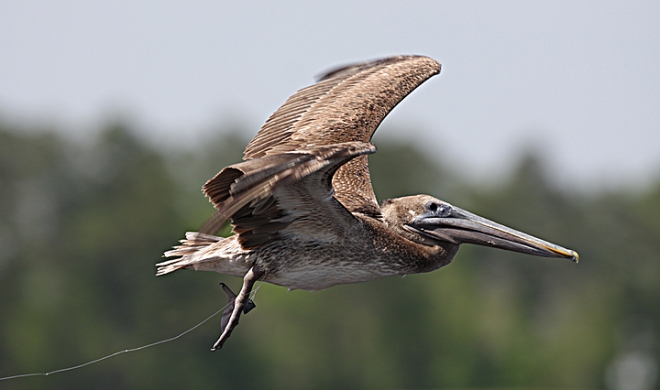 People love to fish and so do wildlife! The big difference between humans and wildlife is wild animals do not need nets, fishing line, lures, hooks or plastic bags when fishing. Therefore, they leave nothing behind that will harm or kill anyone or anything. Left behind fishing gear kills! Wildlife Rehabilitators at the Outer Banks Wildlife Shelter in Newport know this all too well and cringe every time a seabird, wading bird, grazing bird, mammal or turtle is admitted due to the ingestion or entanglement of fishing litter. It’s so painful for the animal and in many cases renders them unable to eat which leads to starvation. Sometimes the devastation is less obvious and can not been seen without x-rays because the animal has swallowed a hook or lure. This type of injury is so frustrating and heartbreaking to wildlife care givers because it is human-caused and therefore, preventable. Nets, lines, hooks, crab pots, shrimp traps or any other fishing equipment abandoned by a boater or someone fishing on shore is considered derelict gear, which labels a fisherman or woman neglectful and irresponsible. This type of dangerous litter is usually made of plastic and doesn’t decompose in water for possibly hundreds of years. Recently, a mature Red Eared Slider was admitted to our shelter who had tried to swallow not one but two fishing hooks. We managed to carefully remove the three pronged hook with bait still attached from his mouth without too much trouble or damage to tissue, but the long, single pronged hook was so embedded in the roof of his mouth and out the side of his cheek, it required a committee discussion on how best to go about getting that out with minimal damage or killing the turtle. 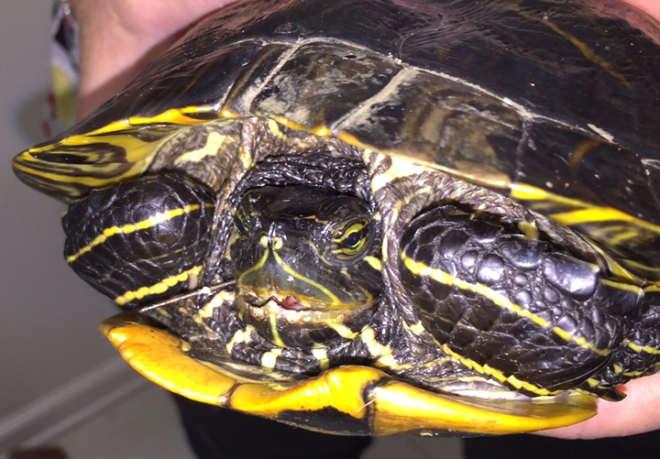 He may not have been noticed or made his way to us if he had become entangled in the line attached to the hooks. Turtles are air-breathing reptiles. When they are caught underwater on a line or in a net, they will drown because they are unable to reach the surface for air. When an animal is entangled in fishing line that has no give, the line wraps tighter and tighter around a leg, wing or neck constricting the blood flow and functionality of the organs, blood vessels and muscles in that area. A fish hook that an animal desperately tries to remove causes lacerations and tears leading to blood loss, serious infections and limited function in the area affected. Some animals, such as pelicans, live with the discomfort of an imbedded fish hook in their body for long periods of time. We know this because hooks have been found in the backs, underbelly or legs of pelicans during examinations for other conditions such as wing fractures or frost bite. Some seabirds have even been found struggling to free themselves from each other because they have become entangled together by a fishing line or multi-hooked lure that was carelessly discarded by a fisherman. During the birds’ struggle they create even more injury to their legs and wings as well as possible nerve damage. Birds and other wildlife that become entangled will experience strangulation, starvation, amputation and in many cases, death. Entanglement is a slow and vicious killer! Because monofilament fishing line is transparent, it poses serious risk to all life, including human swimmers and divers who encounter it. 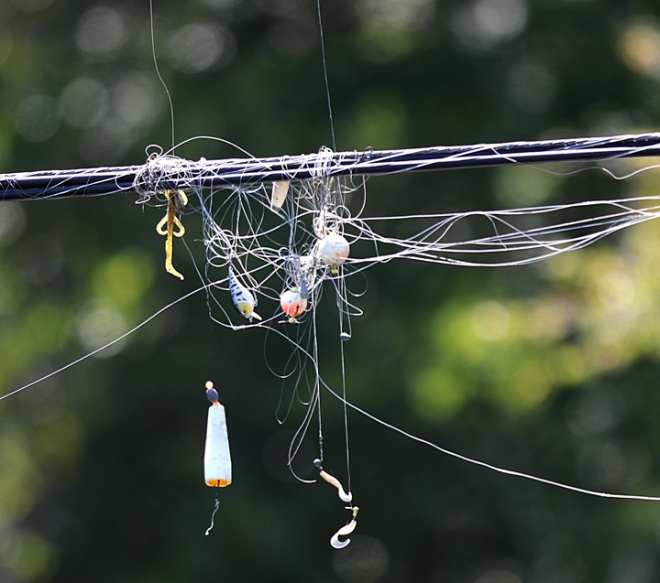 The negative impact of fishing gear waste is huge. Research tells us that the overall populations of seabirds have declined 69.6 percent, which is a loss of about 230 million birds in 60 years. “Seabirds are particularly good indicators of the health of marine ecosystems and when we see this magnitude of seabird decline, we also see something wrong with marine ecosystems.” This information gives us an idea of the devastating and overwhelming impact humans are having on wildlife and our environment. So for those of us who care, what can we do to improve the quality of life for wildlife and our aquatic environment? Get the word out, first and foremost! Do not accept the very little thought given to snapping a line when a fisherman’s lure is stuck on something. In your travels along beaches and recreational waterways, do the birds and other animals a huge favor by looking around trees and shrubs and notice how much fishing litter is strewn or snagged in vegetation, then carefully remove it and dispose of it properly. If you are the fisherman, always take all line and fishing gear with you when you leave. 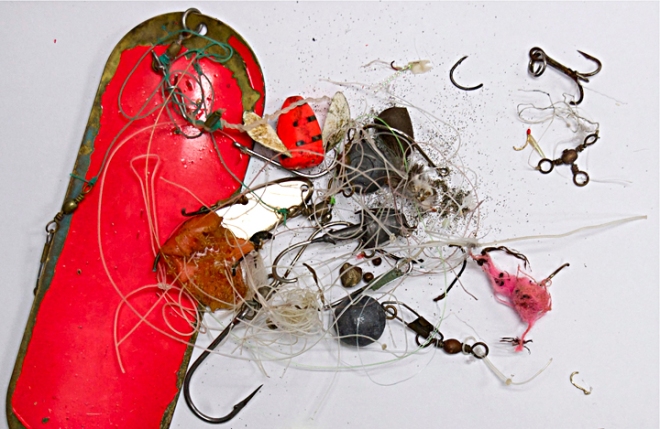 The best way for anglers to reduce hookings and entanglements is to avoid casting near large seabird concentrations. If you are in a boat, move to another area. Most piers are large enough for birds to feed in one area, and anglers to fish in another, or take a break – flocks do not usually remain in one area for long. Using barbless hooks or artificial lures whenever possible can also help. Weight fishing lines to ensure the bait sinks rapidly, before birds can dive for it. Don’t leave fishing lines unattended. Do not feed birds or leave bait exposed because it attracts birds. Take leftover bait home so that birds and other animals don’t get accustomed to free meals. Fish remains are a problem because most seabirds swallow their prey whole. Swallowing parts of fish with exposed bones can cut a pelican’s pouch. Think about starting a program to collect fishing line by constructing and placing collecting bins in the vicinity of your local fishing spots. Please fish responsibly and encourage others to do the same. These are all steps in the right direction for the preservation of our environment and wildlife, as well as public safety. If you encounter an animal that shows signs of entanglement or has been injured in other ways by fishing gear, please call your local wildlife care facility, and they will provide instructions on how to transport the wildlife victim to their center. It’s best not to remove the dangerous fishing gear litter yourself, but to trust the application of a wildlife rehabilitator’s knowledge and skills to ensure damage is not compounded during removal. Let’s do this for our wildlife – they need us!!

BEST ALWAYS,
Linda Bergman-Althouse
author of “Save Them All“ 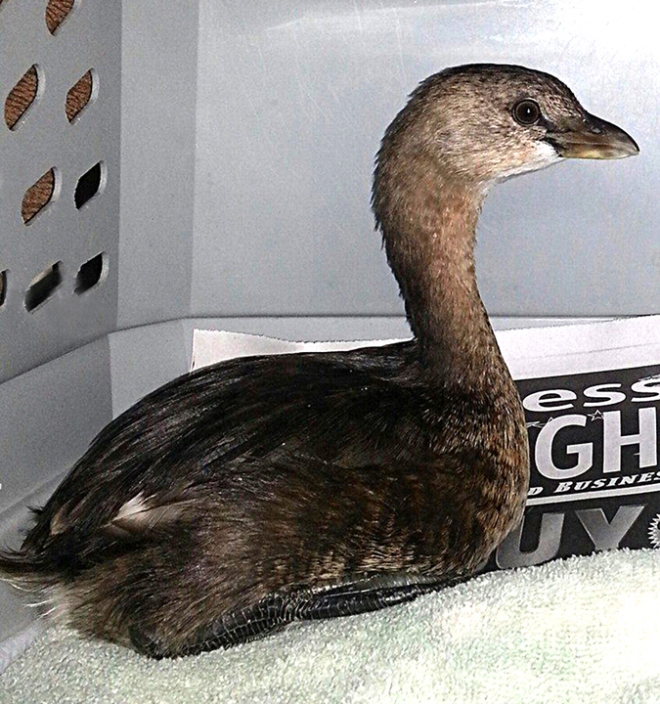 Not often do the volunteers and staff at the Outer Banks Wildlife Shelter in Newport get their hands on a Pied-Billed Grebe, but it happened just a few weeks ago. You see, Grebes are extremely elusive and won’t be found on land unless something has gone wrong. When someone with a compassionate heart found the petite Grebe scooting along the ground, it was thought at the time that the water bird must have a broken leg or two. So, the rescuer scooped him up and transported the short-billed, wide-eyed critter to the shelter. Our examination revealed no injuries to wings or legs and no presence of toxins or illness. Although Grebes rarely fly, when they do, it’s usually at night. So, because the small Grebe is not talking, our educated theory is during flight on a rainy night, an attempted landing on a shiny spot he misidentified as a body of water caused him to belly flop onto wet pavement. Fortunately for him, it was a landing instead of a dive, so although jarring, he survived the mistake but found himself displaced. We decided the best treatment plan would be observation, plenty of good food, water play and Rest & Recuperation so he could recover from the shock and trauma of the predicament he found himself in before we return him to his happy place in the wild. The Pied-Billed Grebe, also known as American dabchick, Devil-diver, Dive-dapper and Water Witch, as well as a few other names, are excellent freshwater swimmers and divers, but they don’t walk very well on land because their feet are far back on their body, similar to the Loon. They can run for a short distance on water, but on land they are not stable and will fall over. PB Grebes are small and stocky with a short neck, compared to other water or marsh birds. They measure between 12 – 15 inches in length and weigh only 9 to 20 ounces. Their wingspan extends from 18 – 24 inches. Their chicken-like bill is short, blunt and light gray. The PB Grebe is mainly brown with a darker brown head and back, which serves as excellent camouflage in the marshes where they live. In the summer the bill sports a black band and their throat area looks much darker, almost black. 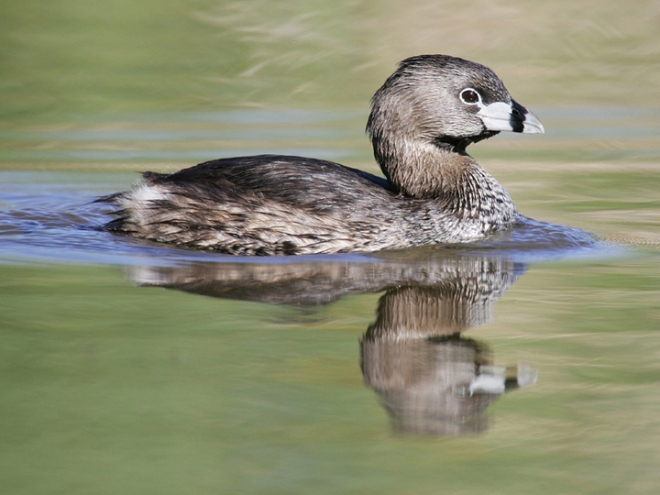 Grebe feathers are dense, soft and waterproof. They have the ability to pull their feathers tight against their body to manage buoyancy as necessary. If danger lurks, they will dive, subtly – no big splash, basically just sink like a gator, up to 20 feet rather than fly to avoid predators. PB Grebes will stay under water for about 30 seconds while moving to a safer location. They often swim low in the water anyway, exposing only their head and neck watching for potential threats. During breeding season, the Pied-Billed Grebe couple, who have courted by singing to each other or together, will use a variety of plant material and twigs to build floating nests on the surface of the water. The nests are built close to shore but far enough away to protect them from a predator attack, which might show up in the form of a dog, cat, raccoon or human. They lay up to two sets of bluish-white eggs each year, numbering 3 to 10 per clutch. Incubation takes about 23 days and both parents oblige, although the female will take over the responsibility toward the end of the incubation period. If the parents have to leave the nest unattended, they will cover all the eggs with nesting material to protect them from predators while they are away. As soon as the youngsters hatch, they are able to swim, although not well and will climb onto a parent’s back for much of their travels until they are skillful enough to dive, hunt and swim like Mom and Pop. Both parents raise the young and will even dive for food with young ones clinging to them. Pied-Billed Grebes prefer to dine on aquatic invertebrates, such as crayfish, snails, leeches and insects but will also feed on small fish, frogs and tadpoles. Their stout, thick bill enables them to crush crustaceans like mussels. They sometimes add plants to their diet, too. An interesting and not well known fact about the “Water Witch” is they have a tendency to eat their own feathers and also feed them to their hatchlings. It’s believed that this odd diet choice assists in the formation of pellets containing indigestible material that can be expelled and to reduce vulnerability to gastric parasites. The greatest threat to the Pied-Billed Grebe is habitat loss. They need wetlands, and wetlands are being lost to draining and filling for residential use. 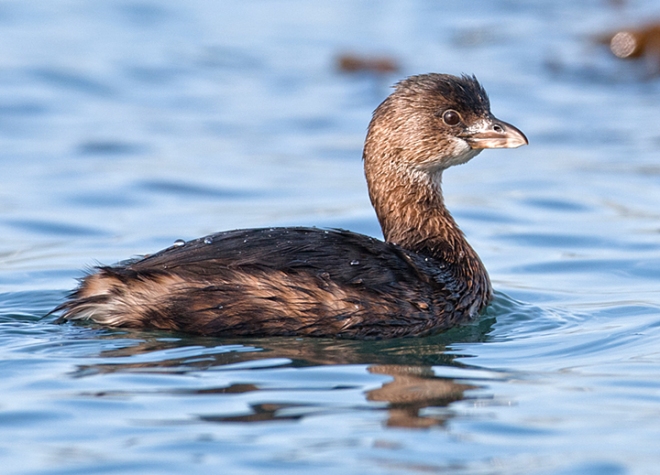 Grebes are shy and very sensitive to disturbances. Even the waves from boats can destroy nests and cause frightened PB Grebes to abandon their nests. Grebes have been declared endangered or threatened in many states, although they haven’t made the list in North Carolina yet. Our Pied-Billed Grebe is a cooperative cutie and doing very well. He will be swimming and diving waters near you soon, and he may even be on the periphery of where you are by the time you are reading this article.

Author of “Save Them All”