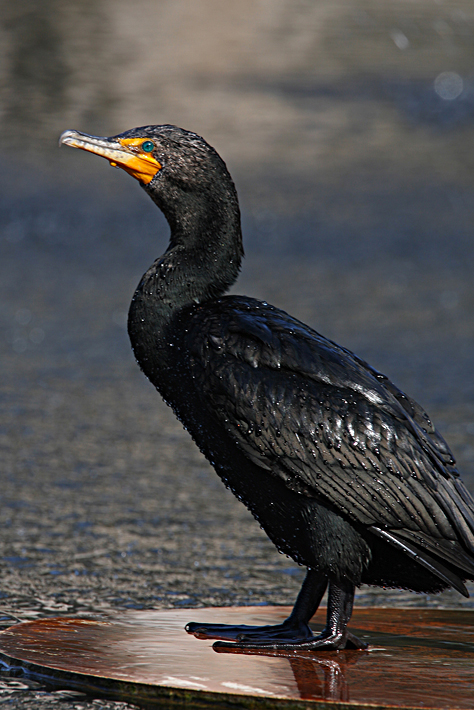 When we receive distress calls at the Outer Banks Wildlife Shelter in Newport regarding beached or injured seabirds, most people can identify pelicans and gulls, but sometimes they are stumped and say “I don’t know what it is, but its all black.” By that description, we’re pretty sure we will soon be admitting a Cormorant. Although there are over 40 species of Cormorants throughout the world, the North Carolina Cormorant is of the double-crested variety with the occasional Great Cormorant passing through. They are permanent residents in the coastal plains region, and the population grows when northern birds migrate to our warmer waters during winter. The Cormorant is said to be from an ancient bird group that dates all the way back to the time of the dinosaurs. Cormorants, coastal water birds rather than oceanic, are large 4 to 6 pounders with wingspans around 54 inches. Adults are black with long, slender necks. They are social, web-footed, aquatic eaters that dive deeply and swim underwater to mainly catch fish, but if presented, they won’t pass by small eels or water snakes. These opportunistic feeders use their slender, hooked bills to take whatever food is available. Some people call the cormorant “snake bird” or “submarine bird” because it swims so deep in the water and disappears for long periods of time only to resurface far from their point of entry. When it’s long neck and pointed head sticks up out of the water, it resembles a periscope because the majority of its body remains submerged.

You may have seen these dark vulture-like birds perched on pylons, tree stumps or rocks with their wings spread open to dry. Their feathers hold water which reduces buoyancy allowing them to dive up to 20 feet, so they need to drip dry a little. The wing drying pose serves other functions as well, such as aiding thermoregulation, digestion and balance.

Stoutly built Cormorants use their powerful legs to help propel them through water and ready them for take-off. If you see a bird running on the water, before taking off skyward, it’s probably a cormorant. The Double-crested Cormorant is the most common species in the eastern United States and goes by the scientific name of Phalacrocorax auritus, which means bald crested crow. The double crest, which appears during its short breeding season, is formed by long, curled upward crown feathers on both sides of its head. Cormorants are monogamous and return to the same site to breed every year. Although we commonly admit adults and one to two year old juveniles that still have a gray or tan colored neck and breast, we never see infants because nesting most often occurs on islands with sparse vegetation, rocky shoals, cliffs or offshore rocks where there is no human presence. Mates will breed at age three and the female will lay 2 to 7 eggs in a 12 to 20 inch high, twigged nest, but on average the Cormorant pair will produce only 2 young. Interesting Factoid: Fishermen in Asian countries such as China and Japan have trained Cormorants to assist them in their fishing pursuits. A loop of twine is tied loosely near the base of the bird’s throat, which allows the bird only to swallow small fish and not the larger ones. When the bird returns to the raft or boat, the fisherman removes the fish from the bird’s throat. This method is not as common today, since more efficient methods of catching fish have been developed, but the fishing partnership of human and cormorant still exists in many remote areas.  The Cormorant is a powerfully robust bird, and our wildlife rehabilitators are well aware that during their rehabilitation we will have quite the challenge of bird versus human strength on our hands. If that hooked bill catches a finger or any other part of your body it will feel like tightening vise-grip pliers that will take both you and a fellow rehabilitator to release, if you don’t faint first! Our hands have to be protected and quick and appropriate holds must be utilized for the bird’s safety and our own. A full visor should be worn when handling these birds who are agile and capable of great force. Cormorants are admitted to the shelter for a variety of reasons to include fishing line or gear entanglement, collisions with automobiles, scrapes with power lines, fungal infections that affect their respiratory system and occasionally, lead poisoning. It is advised that anyone coming into contact with an injured Cormorant, please contact the nearest wildlife shelter for professional assistance. The Double-crested Cormorant is protected by the Migratory Bird Treaty Act of 1918.

Happy Holidays Everyone!!!  And as we wade through the wrapping paper of celebrations to come, may the force of the Cormorant be with you!!!

Best to you Always,