Cute as buttons is the best way to describe the smallest North American carnivores, the Least and Short-tailed Weasels. Weasels belong to the animal family biologists call Mustelidae, which translates to “mouse stealers” and includes 64 species worldwide. So you will find skunks, minks, badgers, the powerful wolverine, martens, black footed ferrets and the largest of the lot, the sea otter in this group. Short-tailed Weasels, also called Ermine, look very similar to the Long-tailed Weasel, except for the variation in size. Short-tailed Weasels are only half the body length of a Long-tailed and, of course, the tail is much shorter, although their tails share the same characteristic black tip. Weasels don’t like to be seen, so in our rehabilitation world at the Outer Banks Wildlife Shelter in Newport, we understand they want to hide and are extremely effective escape artists. That means securing their enclosures beyond their problem solving skills is a must. Our last Short-tailed Weasel admit came in as an infant found abandoned in a North Carolina “Hill” town, Snow or Pink, don’t recall off hand. What a cutie–patootie! Although not old enough to be on her own, she was a capable little weasel who was ready for solid food. Although weasels are mammals, they nurse for only a very short time before needing meat in their diet. Short-tailed Weasels sport brown fur on top, white fur on their belly and white feet. With their long, slender bodies, long necks, short legs and rather flattish head, they are designed exclusively as hunters and mouse harvesting machines! Short-tailed Weasels weigh about 7 ounces fully grown with bodies 7 to 13 inches long. Males grow larger than females. They are slinky with no expression of shoulders or hips.

When you see them in action, they exude graceful agility as they move about doing all that they do; play, swim, climb, run, hunt, court and raise their kits. They have keenly developed senses of sight, hearing and smell, keeping them acutely aware and attentive to their surroundings. Short-tailed Weasels are found in a variety of habitats but primarily near wet sites such as swamps, marshes and especially where brushy thickets reach a waterline. Other habitats include woodlands, brushy areas, stream banks and the borders of forests and fields. They usually nest in hollow trees or stumps, rotting logs, underground burrows, stone walls and mole runs. Dens are also found in abandoned burrows made by other mammals, rock crevices or in spaces among tree roots; one individual weasel may use multiple dens. They are known to tolerate close proximity to humans, but like most predators, they rely on skills of stealth and surprise for their very survival and will almost always see us before we see them. For relatively small creatures, Short-tailed Weasels are courageous and fierce predators, and although they feed primarily on mice and rats, they are known to take on other prey that can be ten times larger than themselves, such as rabbits. Their fierceness led to them being referred to as a “Stoat,” which is of Belgic or Dutch origin, meaning pushy and bold. As strict carnivores, Short-tailed Weasels eat no plant food of any kind. They have high metabolic rates and require 40 percent of their body weight in food daily and up to 70 percent for lactating females. Short-tailed Weasels live alone except to mate. Though it can be more than 9 months between the time they mate and the female births 4 to 12 closed eyed and ears sealed young, weasels are not truly pregnant until March, and their litter is born about 6 weeks later in late April or early May. This reproductive process is called delayed implantation and many wild mammals have this same adaptation. It allows the animals to mate in the fall when they are more active rather than trying to find each other in late winter. Within 2 months of life, kits have been taught to kill their own prey. The crazy, physical games played among siblings help develop strategies and tactics they will need to catch prey. They must be alert, fast and able to turn on a dime to hunt effectively. 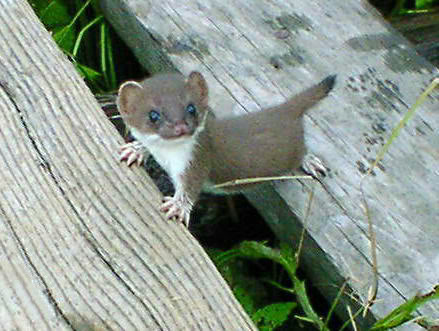 Despite their small size and short legs, Ermine develop endurance and stamina during play that allow them to outrun prey that becomes fatigued. Although they are most active at night, they can be out any time of day. Short-tailed Weasels communicate among themselves through body language and with visual, sound and scent cues. Adults will trill, whine, hiss and squeal, while kits utter chirping noises. They also communicate by using scent glands that can produce a pungent musky odor. Females emit this attractive scent when they are ready to mate. Some folks associate weasels with being trouble makers, because they are capable of making quite a ruckus in a chicken coop if humans render their chickens accessible at night, but please remember all the good they do in the way of controlling our mouse and rat populations. All weasels have an important role to play in maintaining a healthy ecosystem.

The longevity of a Short-tailed Weasel is not long at all. Only a small percentage of kits make it to their first birthday. Predators abound for this cute little racer. They need to outrun and hide from owls, large snakes, coyotes, foxes, falcons, hawks and humans. If they do survive that first year, they may live for several years. In captivity the record life span has been registered at 8 years. Short-tailed Weasels are so secretive that we don’t know a lot about them, and there is certainly more to be learned. It was a thrill for the volunteers and staff at the Outer Banks Wildlife Shelter in Newport, NC to raise our tiny stoat and learn as much as we could from everything she had to teach us. Hopefully, she is still out in the wild living her little weasel life and staying out of trouble!