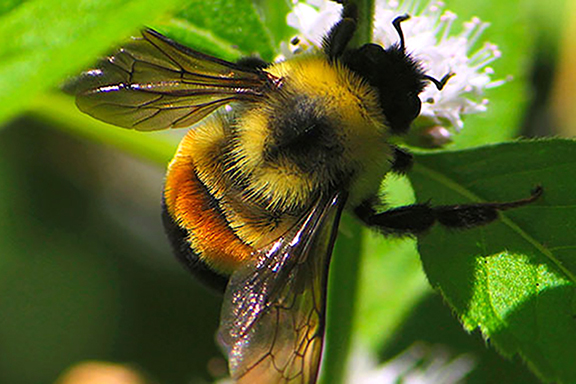 It’s unusual for the staff and volunteers of the Outer Banks Wildlife Shelter in Newport, NC to be as highly concerned about a wild creature we don’t rehabilitate as we are, but this living being . . . this insect . . . rules the world! That is not an exaggeration. The Bumblebee, especially the Rusty Patched Bumblebee which was once a common sight throughout the entire continental United States, is in serious trouble. Now it can only be found in small, scattered groups in 13 states. The bee’s population has plummeted by 87 percent since the 1990’s, and as of 9 November 2018 and for the first time in history, the RP Bumble Bee is officially listed as an endangered species on the brink of extinction. It is a ghost in the making. Yes, it is only one listed bee species, but it is a significant start to stronger action that needs to be taken to recover our bees! We are finally acknowledging in a formal and proactive way that if we lose our bumble bees, there will be no plants or parks, no forests or shrublands, no meadows and no vibrant life the bees support such as wildlife, domestic animals and the human animal. All these life forms simply cannot survive without bees. Bees have now joined the Grizzly Bear and the Northern Spotted Owl as heading for extinction if we don’t do something quick! 347 species of bees have drastically diminished over decades due to habitat loss, use of pesticides, mechanization of agriculture, disease, parasites and climate change, according to the Fish and Wildlife Service. This tiny creature, the bumblebee, known for growing our world is now protected, and we all need to do our part to help save them. Bees certainly don’t get the respect they deserve for all they do. Most people don’t like bugs of any kind and see the bee as a menace to their immediate environment, so they end up swatting it and possibly killing it, not realizing the devastating effects the loss of that bee will create. And how about the large number exterminated at one time when bees have taken up residence in an area or pocket deemed an inconvenience to a human, such as between the walls of a shed or under a porch, and they are all sprayed dead? Bumblebees do not damage wood or other structural components. If a bumblebee nest is discovered on your property, its best and safer to just leave it alone unless there is a good chance your activities will take place near the nest. If that’s the case, calling bee experts to orchestrate a safe conservational move might be the way to go. 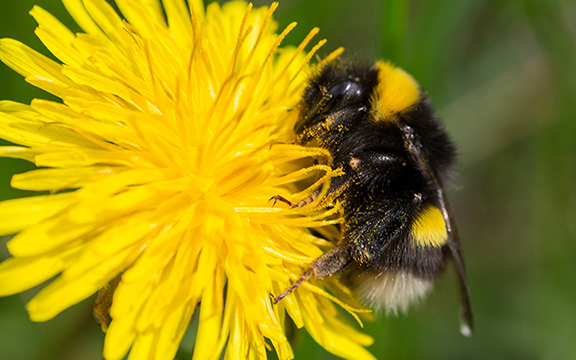 Foraging bumblebees will almost never divert from their tasks to intentionally sting someone or their pets. A few other reasons to accommodate a bumblebee nest is of course, their huge value as pollinators, the small size of their nest and their short life span when compared to other stinging insects such as yellow jackets and hornets. Although bumblebees are capable of stinging, they are quite gentle, docile and not as aggressive or likely to sting as wasps such as those hornets and yellowjackets. The male bumblebee cannot sting, and females only do so when they feel threatened. Also, in their defense, bumblebees make up for that unique and unappreciated behavior of stinging by being among the most important pollinators of crops such as blueberries, cranberries and clover and almost the only insect pollinators of tomatoes. They basically pollinate everything, which emphasizes what a food security issue the loss of bees presents! According to the U.S. FWS, “the economic value of pollination services provided by native insects (mostly bees) is estimated at $3 billion per year in the United States.” Bees are tiny and usually go unnoticed unless they buzz by you or in your face, but keep in mind when you deem them an annoyance that these pollinators are a huge part of the natural mechanism that sustains us and our world. Without them, food will not grow.

Bumblebees are large, fuzzy insects with short stubby wings that beat 130 times or more per second in a sweeping motion rather than up and down. They seem to defy aerodynamics when you consider their tiny wings versus their rotund body. How they manage to stay in the air is a mystery to many bumblebee fans. Their extremely fast metabolism requires them to eat nectar or pollen constantly when they are on the move. It is said that “a bumblebee with a full stomach is only 40 minutes away from starvation.” Bumblebees are some of the most social creatures in the animal kingdom. A group of bumblebees is called a colony, and colonies can contain between 50 and 500 individual bees. Bumblebees are larger than honeybees but don’t produce much honey, because their role and mission is that of a remarkable pollinator. Other animals are pollinators as well to include birds, bats and butterflies, but there’s no question that bees are the most important, significant and vital pollinators in our ecosystems around the world. Bees are dying, but there are ways for everyone to help stop the bees’ decline. Recommendations are to plant native and bee-friendly flowers, limit or avoid pesticides, foster natural landscapes, leave grass and garden plants uncut after summer to provide habitat for overwintering bees, strategically place old logs on not frequented areas of your property, plant new habitats for the bees to thrive in, provide supplemental nectar (30% sugar & 70% water in bottle caps in and around flower beds) and even build nesting boxes for bees. 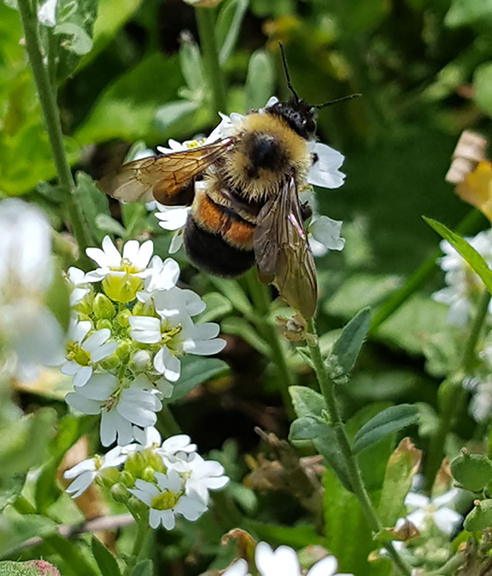 As we enjoy the aesthetic beauty all around us; the greenery, the flowers, the trees, wildlife, please give credit where credit is due, to the bumblebee, which is also beautiful in its fuzzy, buzzy way! Our community goal should be to bring the bumble bees’ numbers back to a healthy level. If you haven’t yet, let’s get ready and start this process now. There are things we can do to prevent the decline of our precious bees, and so we should. Please join us in the efforts to save these fat, fuzzy fliers. It just might be the best Christmas present we will ever give ourselves and those we love! Bee Merry!

author of “Save Them All”