She was built like a race car; smooth, sleek and shiny black with an aerodynamic head. From the beginning, the adult Purple Martin did not enjoy her stay at the Outer Banks Wildlife Shelter in Newport and probably couldn’t figure out why she was there, but a day earlier she had a moment of stillness on the ground long enough for a human to pick her up, place her in a box and transport her to our shelter. For an individual to be able to do that with a wild bird is evidence that something isn’t right. A thorough examination revealed no injuries or illness, so theories were shared that she may have been knocked out or stunned by running into something or maybe because of the heat, dehydration occurred. We didn’t know how long she’d been on the ground without food or water, so keeping her with us for a couple days while providing hydration and a steady diet of mealworms and crickets would ensure she wasn’t malnourished when returned to the wild, but she wasn’t having any of it! She refused to eat, even though nestlings were chirping and gaping all around her in the nursery while being fed every 30 minutes. She watched them eat, but she was not a baby and would not be doing that. She hid behind a basket of youngsters when feeding time began and would not accept mealworms offered her by tweezers or allow a wildlife rehabilitator to open her mouth to drop a few worms in. That was not going to happen; how undignified!! With no food or water, she would only get weaker, so this could not continue. She was removed from the enclosure with the young birds, even though there were a few juvenile Purple Martins present we thought she could relate to and placed in a transport bin by herself. A pile of mealworms and crickets were dropped into the bin, and the bin was covered so she could not see us, and we could not see her. In a half hour, she was checked on, and although Purple Martins eat on the wing, most of the mealworms and all the crickets were gone. Good Girl! How about some more? She ate to her tummy’s content, and that evening she was assimilated with a well-known flock of Purple Martins living in a wetlands area that provides three, man-made Purple Martin condos. When the lid of her transport carrier lifted, she rapidly flew to join her kind, who were vacuuming the sky of insects for their evening meal, and we could tell she was one much relieved bird. The Queen was happy and where she needed to be. 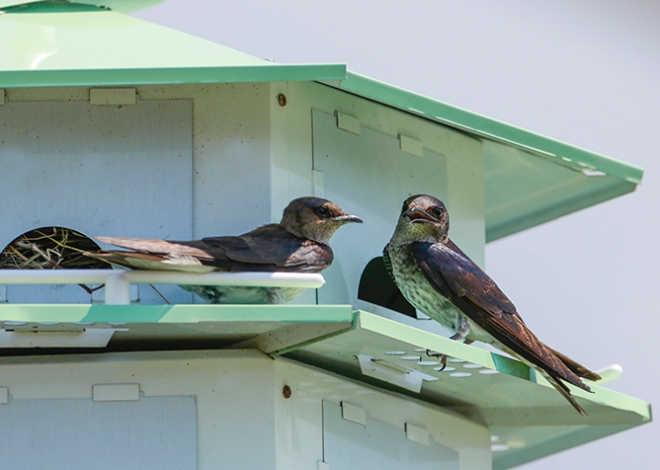 The Purple Martin is North America’s largest, broad-chested swallow. They have stout, slightly hooked bills, short-forked tails and long, streamlined and tapered wings. Their wingspan is between 15 – 16 inches, and they fly gracefully and swiftly with a mix of flapping and gliding. Adult males are black and lustrously shiny. When the light catches that shine, they look dark blue-purple.

Females and immature Purple Martins are black on the top side but have splotches of gray around the throat and sport light gray feathering on their chest and belly. Purple Martins like to talk to each other in chortles, rattles, gurgling and croaks. Purple Martins are aerial insectivores which means they catch insects such as dragon flies, house flies, wasps, moths and butterflies in midair, as well as, drink and bathe during flight. The birds are alert and nimble hunters and do eat a variety of winged insects but not mosquitos.

We must leave that task to the Chimney Swifts and Fly Catchers who hunt at a lower level. Rarely, will a Purple Martin come to the ground to eat insects because they usually fly higher than most insectivores when they hunt. However, recent research has found Purple Martins occasionally feeding on invasive fire ants. Purple Martins are colonial, therefore feed and roost in flocks, often with other species of swallows mixed in. They feed in open areas, especially near water and in our area of the east coast, nest exclusively in boxes and martin houses provided by humans who appreciate their value. That human initiative goes back to the Native Americans, who once hung empty gourds to attract Purple Martins. Martins do very well near caring humans, but it’s a look but don’t touch relationship. Purple Martin condos should be monitored because very aggressive and non-native species birds such as Starlings and House Sparrows are known to invade a Martin condo in a take-over and possibly kill their nestlings. Advocates for Purple Martins are extremely concerned that the Purple Martin will simply disappear from eastern North America if human condo security is not provided. 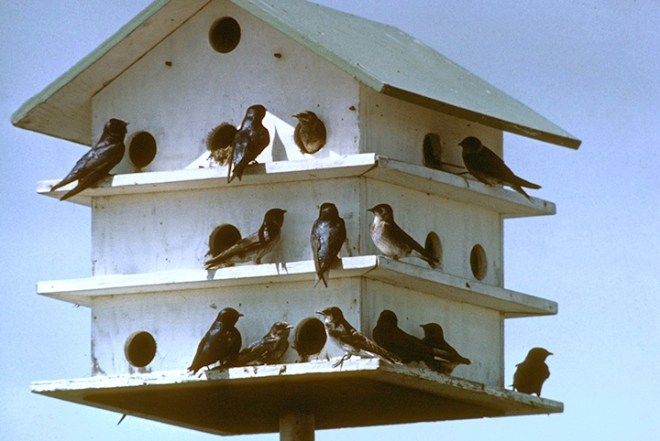 In the west Purple Martins search out natural cavities for nesting. The nest inside the cavity, condo or gourd is made of twigs, mud and small stones, then lined with grasses and leaves. Three to six white eggs are laid, and the female is the main incubator for 15 – 18 days. A pair of martins will generally raise only one brood per year, with both male and female alternating the feedings of the nestlings. Fledging occurs in about a month after birth, but the parents continue to feed them while teaching them to hunt. Purple Martins are highly social birds and migrate in large, noisy flocks to winter in South America at the Amazon Basin or the Barba Azul Reserve. They show up in Eastern North Carolina to breed in the Spring during March and April, depending upon weather warm enough to produce insects. Males arrive at the nesting area, which is usually the same site year after year, before the females. They stay until breeding season is over, then head back during July through October, also, depending upon the weather, to South America. Purple Martins have shown a steep population decline over the past two decades and as a result have been placed on ‘The Watch List of Special Concern.’ Factors that contribute to the loss of PM’s include pesticide use, colliding with buildings and bridges, unseasonably cold or wet weather (wipes out insects which causes food source loss), aerial predators such as hawks and owls, ground predators such as raccoons and snakes and, those invaders mentioned earlier; Starlings and Sparrows. With every subsequent Purple Martin admitted to our shelter for care from here on out, we will think of our regal PM girl who knew herself all to well and wanted absolutely nothing to do with us! We hope our sassy girl is still flying high and appreciating the precious freedom she proved to hold dear.