When I got the late afternoon call, it didn’t sound good. A squirrel was cat attacked and rescued by a little girl who had been holding the adult squirrel in her lap for over an hour. As a wildlife rehabilitator with years of squirrel experience, my first thoughts were, this squirrel is mortally wounded and on his or her way to squirrel heaven or the squirrel’s in shock. If it was the latter and the squirrel came around while on the youngster’s lap, the scene would not be pretty and could possibly become dangerous to downright bloody. After the gentleman caller told me that he thought “all the squirrel needed right now is to be held and kept warm,” I knew I had to get that squirrel off the nine-year-old’s lap. I met the family at Burger King around 6 pm, and the little girl was still carrying the squirrel in her sweatshirt, even after my advisement to place her in a box for transport. The squirrel was moving but not responding normally, so I gently transferred her from the sweatshirt by towel to a kennel cab. In the triage at my home, I placed the kennel cab on a heating pad and gave her some time. An hour later, she was a totally different squirrel. She growled, chattered and charged the door more than once when I checked on her. Confirmed: it was the latter. Even though the towels evidenced no sign of blood, I figured a ride to the Outerbanks Wildlife Shelter (OWLS) in Newport, when I went in for my shift the next day, was in order to give her the once over for possible puncture wounds that would need to be cleaned and treated. The ride to the shelter went well, but the exam room was another story. She was totally IN rather than OUT of her little squirrel mind and wanted no part of an exam, probably reflecting on the cat that pounced on her and carried her around a day earlier. Maria and I are much bigger than the cat! We decided not to sedate her because of the risks involved and since she was acting her normal squirrel “in survival mode self,” avoiding us at all costs and still no signs of blood or injury, the decision was made to take her back to her neighborhood and the trees she knows. It was dark when I arrived home on Christmas Eve, so back into the triage she went. She would be a Christmas Day release, or so I planned. Christmas morning, after feeding all the outside critters, I headed into the triage and the place looked like a robbery had gone on in there; things were overturned, knocked off shelves AND squirrel poo pellets were ON TOP of the kennel cab! She had chewed her way through the side of my toughest kennel cab and was no longer inside. She beat the live trap three times Christmas Day before finally being caught Christmas night. Then it snowed quite heavily the very next day!!!!!!! Snow is welcomed by most North Carolinians, because it happens so rarely, especially on the coast and even more appreciated around Christmas, but not so much when you have an agitated adult squirrel to release. So, I had to wait for a partial melt off before her release, which wasn’t until two days later. While confined to the live trap, she had plenty of food and water, and even felt comfortable enough to do a little remodeling by chewing at least five cover towels to make nesting material and because it was Christmas, I used red, green and white towels, of course. She chose white as her dominate color as you can see. 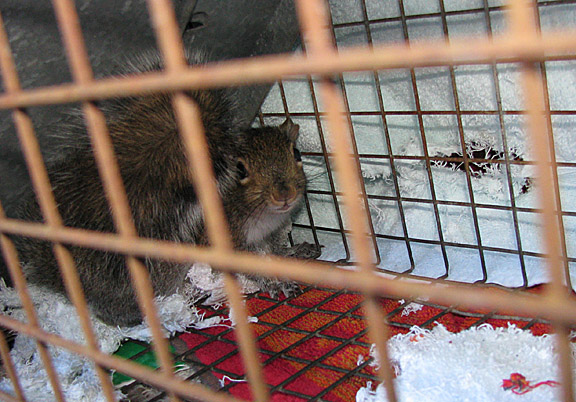 On Tuesday, I called her rescuers to let them know she was coming home. The little girl wanted to be present, along with her Dad and brother. I’m thinking – there’s not a lot to see with the speed of a squirrel release, but it was cute. They were all standing in the road, flagging me into the drive, when I arrived. I found a big tree and pointed the live trap towards it. No one saw anything! She was so fast, she was out of the trap and up the tree before our eyes could register anything! It even took a while before we could locate her in the tree! After dumping a zip lock bag of squirrel munchies at the base of the tall pine, I wished the family a Happy New Year! and we parted to enjoy the remainder of our holiday season. I’m hoping, with everything the squirrel experienced in the past week, she knows to be a whole lot faster, way more vicious and a little wiser when moving about during her daily scheduled activities.

Happy New Year Everyone!!
Linda Bergman-Althouse
Author of “Save Them All”