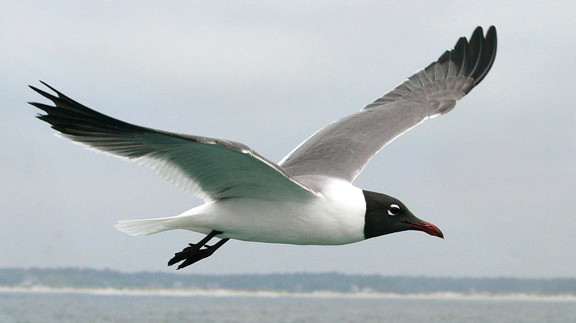 Laughing, Ring-billed, Herring and Black-backed Gulls get a bad rap. Many people refer to them as nasty because they have a tendency to congregate and hang out with people, which can get a little messy. People also call them Seagulls, which is a misnomer, because there really is no such bird. They’re all gulls of a different variety. Gulls are admitted to the Outer Banks Wildlife Shelter (OWLS) routinely because these smart seabirds, who seem to understand human behavior, and heavily people populated areas don’t bode well, especially for the gull. Possibly a fishing gear injury or a car clip brings them in, but more than likely their bad human diet takes away their ability to fly. The wildlife rehabilitators at OWLS understand who they are and also, what humans have encouraged them to do, and we respect them the same as any other wildlife admitted for our care. They are usually easy to work with, save the occasional biter and don’t get stressed by our presence. Generations of gulls have been conditioned over the years to expect movie popcorn strewn in a parking lot, a hefty helping of fries at fast food joints, small children, encouraged by adults, throwing bread into the air at parks, fast food bags that are fun to open along the highway and an outstretched hand filled with snacks connected to a human’s body wishfully attempting to bond with this wild bird. Gulls get so used to relating humans to food presence they will swoop down and aggressively annoy just about anyone for a morsel of anything! When they get in trouble or more specifically injured or downed because they spend all day eating low-nutrition, snack food which produces a one-sided diet, they may get sick or become malnourished which atrophies their feather shafts, rendering them unable to fly. That’s when someone can walk right up to one and put it in a box for delivery to our shelter. No one should be able to pick up a high flyer like a gull. Their feathers are extremely important. Of course, we know they need feathers to fly, but those feathers also serve as a temperature regulator, protect them from wind, moisture and sun, trap air to help them float, become nesting material and fish eaters, like gulls, eat some of their feathers to line their digestive area to protect sensitive membranes from sharp fish bones. Most animals, including gulls, have evolved with very specific natural diets and have unique kinds of digestive bacteria. Human food ingestion causes the wrong type of bacteria to become dominate in their stomachs, which can cause them to be no longer capable of digesting their natural foods. They can end up starving to death even with stomachs full of what they should have been eating all along. It is absolutely essential to the health and well-being of gulls that they not be fed by humans intentionally or indirectly through littering. Some people think they are just supplementing the gull’s diet with their generous but uneducated offerings, when in fact they are altering and very possibly ending their lives. Not feeding them will allow the gulls to find natural food sources, which provide better nutrition than food intended for human consumption. 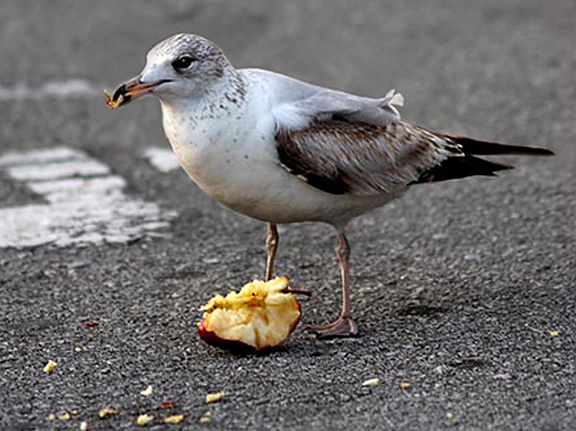 A parking lot apple core may be the best nutritional choice a gull makes in weeks, although he probably dodged traffic to get it, but it’s not enough to keep him healthy and alive. Please think twice about throwing down that French fry or cheese puff for a gull to gobble. If we all made the decision to withhold the junk food, we might just cause the gulls to leave our asphalt jungle and return to big water, and in essence, save their lives (and the finish on our cars!). Gulls are great problem solvers like crows and opportunistic scavengers who eat alive or dead fish, garbage, field mice, earthworms, insects, eggs, well . . just about anything. They are not that picky. Gulls are predators by nature and nature enables them to live within their resources without human snack foods. All Gulls are essential in maintaining ecological balance and are found everywhere in the world. Some folks get intimated by them because they are immensely sociable within their breed and tend to travel and forage for food anywhere in large numbers, especially in areas where humans are known to feed them. People have created this abnormal gull behavior through a very simple rewards system, so we really shouldn’t complain about maneuvering around them at our shopping malls, the seabird poop on our cars or the relentless squawking they seem to enjoy. Their communication system causes gulls to be very noisy birds, but they get along well with each other and very rarely fight. The Laughing Gull is a very common summer resident (less so in winter) along the coast, but is rarely seen far inland. It is a small but handsome gull, with a styling ebony head, dark red bill, and white crescents above and below the eyes. In summer, it’s the only gull you’re likely to see with a black head. In winter, the color fades to a whitish gray. The Ring-billed Gulls are larger than Laughing Gulls and as the name implies, has a dark ring on the tip of their yellow bills. They’re common year-round residents of North Carolina, but especially in the winter. Ring-bills are the gulls likely to scavenge for scraps at McDonald’s or in a garbage dump. They’re also the tag alongs behind tractors as they plow the coastal plain fields. 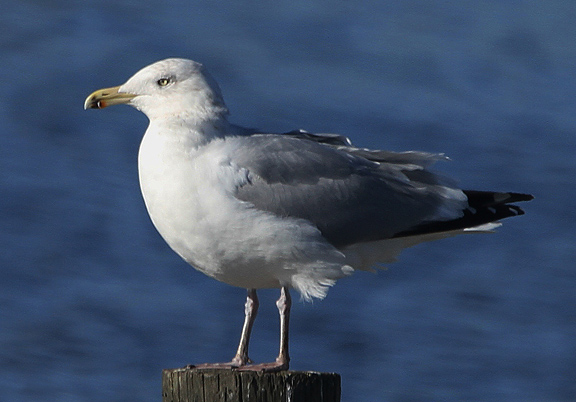 Herring Gulls are larger than Ring-billed gulls and are the most common of all our gulls. They have a white head and chest, gray back, and black wing tips. Their legs are pinkish and their yellowish bills have a red spot on the lower mandible. Herring Gulls are more common in winter, but you can also easily find them during summer. Like Ring-billed Gulls, unfortunately, Herring Gulls are fond of hanging out at landfills. 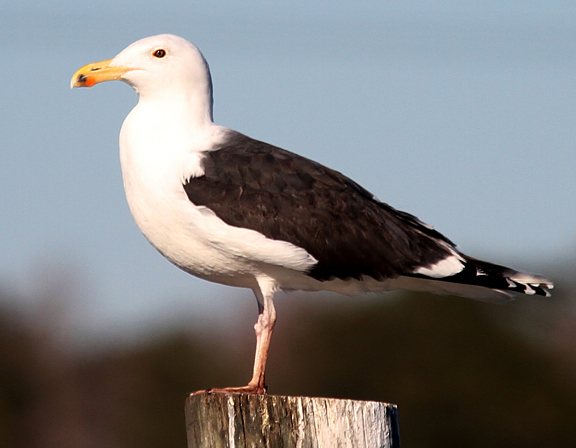 The last of the commonly observed gulls (and my favorite) is the great Black-backed Gull which, as the name suggests, has a black back. We have one at the shelter now that I call “Big Baby Boy.” Not only is the Black-backed the largest gull in our state, it’s the largest gull anywhere. It lives year-round along the coast, but is especially common in the winter. Gulls have a lifespan of about 8 to 10 years (if we quit feeding them junk food). So, unless you visit the waterfront and just happen to be carrying a plastic bag filled with small fish, please do not feed them. It takes way too many months of care, nutritious food and clean-up at the shelter to allow their feathers the time needed to recover to flight capability after a steady diet of bread, crackers or cheese puffs.

Linda Bergman-Althouse
Author of “Save Them All”