Who doesn’t love pumpkins, especially this time of year? Humans hunt for their favorite ‘size and shape’ pumpkins to decorate or display for the holidays, carve into master pieces for Halloween and cook into scrumptious donuts, pies, muffins, sweetbreads, pancakes, and you name it. It’s pumpkin everything! Most people don’t think about wildlife loving this fruit or is it a vegetable (the debate rages on) as much as humans do, but it’s true! From bats and birds to bears, if a pumpkin is nearby, they are going to eat it. Pumpkins are tempting treats most wildlife can’t and won’t resist. Pumpkin flesh is full of water, so it’s as refreshing as it is tasty. Our wild animal patients and residents at the Outer Banks Wildlife Shelter in Newport will soon be munching pumpkin because some pumpkin loving people ‘over-pumpkin’ and need some place to take all those perishable, post-holiday pumpkins. After Halloween or Thanksgiving is officially over, many wildlife enthusiasts will dismantle their Jack-O-Lanterns or whole pumpkins by breaking them into pieces to put in their woods or yards for their own wildlife visitors and bring the rest to us! They know the wildlife in our care will benefit from the addition of this nutritious food source to their diets and through the enrichment of exploration. At the shelter, we’re known to hollow out pumpkins, save the seeds for the birds and squirrels, 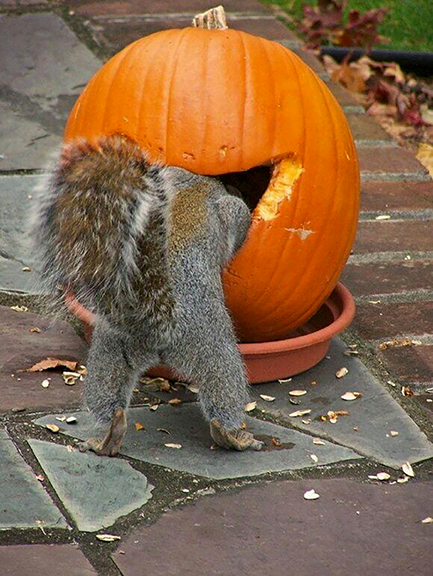 and fill them with foods for our vultures, opossums and fox. All the animals seem to enjoy maneuvering the big orange ball and taking it apart to get to the hearty and scrumptious morsels inside. They also do not pass up munching the tasty pumpkin! If you decide to put pumpkins out for wildlife, it’s best to cut them in half or better yet, break them into pieces to ensure squirrels or smaller animals won’t get stuck inside, especially if temperatures drop to freezing. That doesn’t happen often in eastern North Carolina, but it has, and pumpkin flesh freezes to fur! We also don’t want a deer’s head stuck in a pumpkin. That has happened, too. Please don’t feel too badly if critters start munching on your holiday decorations earlier than you’d like them to. They, especially squirrels, are known to do that, even if the pumpkins aren’t carved yet. These gnawing experts will start the carving process themselves! If you have squirrels in your area that get into the Halloween Spirit early and are notorious for carving their own pumpkins, just don’t put them out to early, and that will remedy that. Keep in mind that they don’t know that’s your pumpkin and that you’re trying to make a seasonal statement. You’re basically putting out food for wild animals.

So let’s see, who is going to visit you if you put your pumpkins out; deer, rabbits, squirrels, bats, groundhogs, seed eating birds, opossums, raccoons, fox, snakes, porcupine, skunks, if you’re creek or river side or close to marsh lands –

otters or beavers, and if you are in bear territory, BEARS (so, if that’s the case, best not put the pumpkins out or at least wait until brown and black bears are entering their winter dormancy, which is usually just after Halloween passes). Okay, let’s take bears out of the equation. If you don’t have bears and your pumpkins are still fresh and not moldy, recycle your pumpkins by making a ‘Snack-O-Lantern’ for your wildlife, because they will love all that pumpkinliciousness! When in season, Zoos around the world provide their resident animals pumpkins for enrichment and special treats, too. From tiny fish and weasels, large Chimpanzees and Red Pandas to huge Hippos and Rhinos, pumpkins provide great excitement for zoo and sanctuary residents. Research states that a whopping 39 million pounds of pumpkins are thrown away after Halloween! That’s about the weight of 1,500 double decker buses! 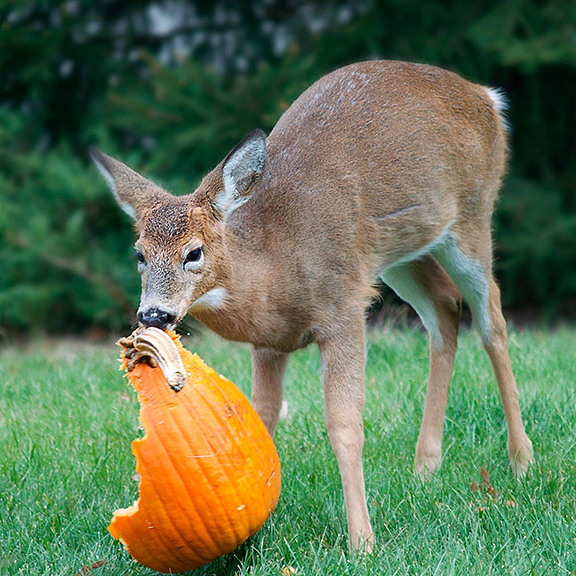 So, instead of trashing your pumpkins, please use them to help wildlife. Humans, who anticipate the set up of seas of orange splendor, go crazy at pumpkin-patch time, but remember animals like them, too! So, what you can’t use at your house or in your neighborhood after the holiday, take them to a wildlife shelter near you, and the staff will present them to some adorable wild ones who will make good use of them. If a pumpkin unfortunately succumbs to mold before you can use it as food for wildlife, bury that one in your garden or yard or add to a compost pile. Pumpkins quickly break down in the soil and worms and insects will be all over the pumpkin yumminess. Then, all the birds and animals that eat worms and insects will be all over them. It’s the whole “Circle of Life” thing. Pumpkins are extremely popular with such a wide range of animals and insects that it would be a shame to let them go to waste. Enjoy the happy, orange season and hope to see you at the wildlife shelter soon, with pumpkins!

author of “SAVE THEM ALL” 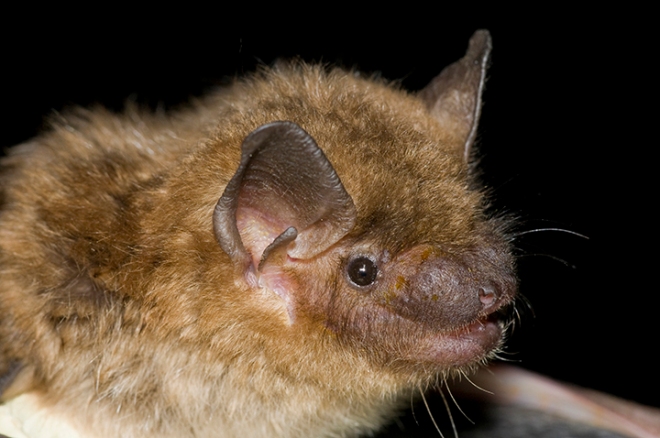 Yes, I am a mammal, and Yes, I can fly! The only mammal that is truly capable of free flight and able to launch under their own flapping power from a still position is a bat. They are not gliders like Southern Flying Squirrels, and like other mammals, they give birth to and nurse live young. Big Brown Bats, who are not very big at all, are one of the most common bats in North Carolina. Although their bodies are about five inches long, not counting the tail, and they have a wingspan up to 13 inches, they weigh only .5 to 1.5 ounces. Big Brown Bats have brown fur above and paler fur below. Their wings are black and devoid of fur. The bat’s wing is an extension of the skin of the abdomen that runs to the tip of each digit, uniting the forelimb with the body. It’s comprised of two tightly stretched layers of skin membranes joined by connective tissue without any flesh between layers. We are able to see through a bat’s wings because of this anatomical construction. This formation of skin membranes is called the patagium. The first digit of a bat’s wing, which is similar to our thumb, is small, clawed and used in climbing or walking on the ground.

Their unfurred ears are rounded and dark in color, matching their wing membranes and tail. Their lips are fleshy and their nose is quite wide for the size of their face. Bats are not brought to the Outer Banks Wildlife Shelter in Newport for rehabilitation, but we do get calls asking about them. Some calls, from environmental enthusiasts, question how they can encourage a bat colony to reside in their neighborhood, because they are aware that bats help keep pesky insect populations down. One caller wondered why a bat seemed to be parked on their swimming pool pump during the day when bats are usually not active. That bat turned out to be a youngster just trying his wings and, unfortunately, didn’t make it home before morning. Bats are primarily nocturnal (active only at night), though they also forage in the early evening and early morning hours. All bats found in North Carolina eat insects and because they are nocturnal, they feed on nocturnal insects including mosquitoes and many important agricultural pests. A large colony of Big Brown Bats can eat 18 million corn rootworms each summer placing them in the roles of farmers protecting valuable harvests. A single bat can wipe out 21,000 insects, such as moths, flies, wasps, flying ants and beetles (their favorite meal), annually. All bat species can have a major impact on controlling insect populations, therefore bats are integral to ecosystems worldwide. A nursing female may consume almost her entire body weight in insects in one night. Just imagine how many insects an entire colony of bats would consume. Tropical bats disperse large amounts of seed and pollen, which aids in plant reproduction and forest regrowth. Although bats have relatively good eyesight, most depend on their expertly developed echolocation (or sonar) system to navigate and capture insect prey in the dark. By listening to the echoes reflected to them, they can perceive objects and bugs in their path by size, shape and texture of any tiny insect from its echo. Their echolocation ability is so acute they can avoid obstacles no wider than a piece of thread and capture some itty bitty flying insects, even in complete darkness. Bats produce ultrasonic sounds through their mouth and nose to communicate with each other. You won’t see them, but Big Brown Bats are roosting during the day in hollow trees, beneath loose tree bark, in the crevices of rocks, or in man-made structures such as attics, barns, old buildings, eaves, and window shutters. 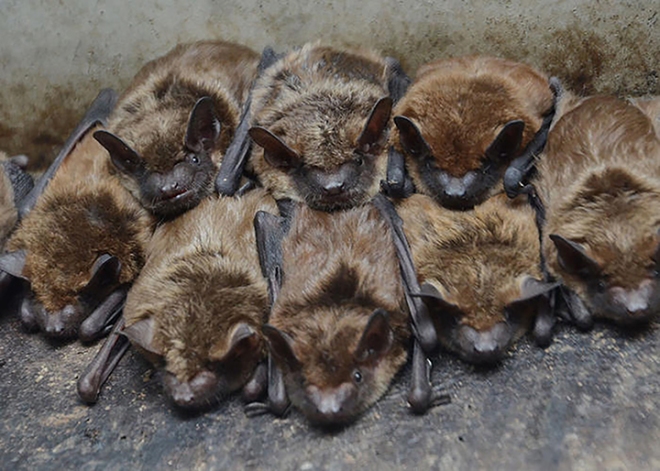 Bats have adapted well to our urban and suburban environments. Bats can also be found in and around commercial buildings and bridges. The most common place to find bats in homes are the gable vents. Gable vents are screened vents located in roof peaks that aid in proper attic ventilation. Bats generally don’t come in contact with humans unless they are sick, injured or have moved into your house. Despite misconceptions, rabies is not very common in bats, but it’s still best to avoid handling bats and to always use proper caution in their presence as with any wild animal. Big Brown Bats mate during the fall and winter before they go into hibernation, but the female does not become pregnant until the spring as she stores the sperm during hibernation. Female Big Brown Bats form nursery colonies to raise their young. The size of these colonies can vary, but usually fall within the range of a modest 20 to a massive presence of 300. Bachelor BBB’s roost alone or in small groups during this time. In late May or early June, the female gives birth to one or two pups. The babies are born blind, with no fur and completely depend on their mother for nourishment. They grow quickly and will fly within a month to six weeks. The North Carolina Wildlife Resources Commission conducts monitoring studies in a variety of areas across our state to ensure the protection and presence of the Big Brown Bat continues as it is an environmental partner who improves our quality of life. Through a variety of methods, such as mist netting, trapping, banding and radio telemetry, commission biologists collect age, weight and gender information on bats so they can track species distribution and locate hibernation areas which helps to develop eﬀective conservation plans. 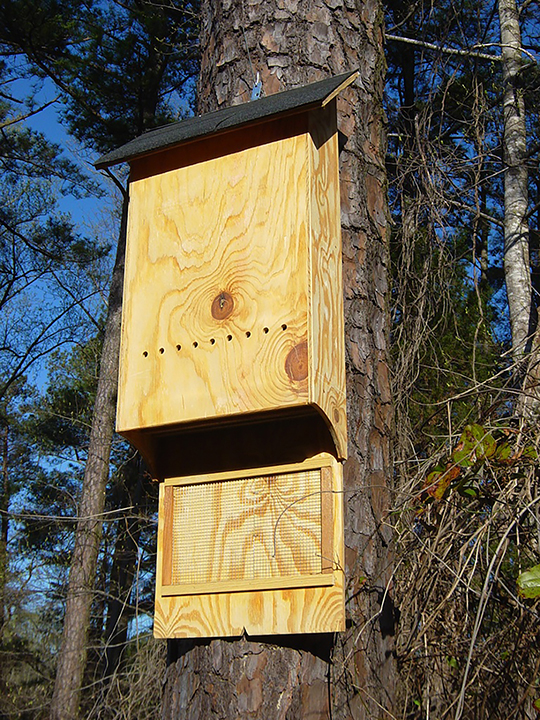 You can do your part to conserve bats as well by installing bat boxes around your home, planting native foliage that attracts helpful insects to provide food for bats, limiting the use of insecticides and herbicides, avoiding hibernation areas and maternity colonies, joining a conservation organization to remain updated on bat conservation efforts and continuing to educate yourself and others regarding the importance of bats and why they are beneﬁcial. Bat populations have declined over the years mainly due to pesticide use and human disturbances, as well as, persecution. Natural predators include snakes, owls and raccoons, but if a bat can outwit, outplay and outlast predation Big Brown Bats are relatively long-lived mammals and can survive 20 to 30 years in the wild. That is a mighty long, free contract we can all enjoy with our furry, flying natural pest exterminators!