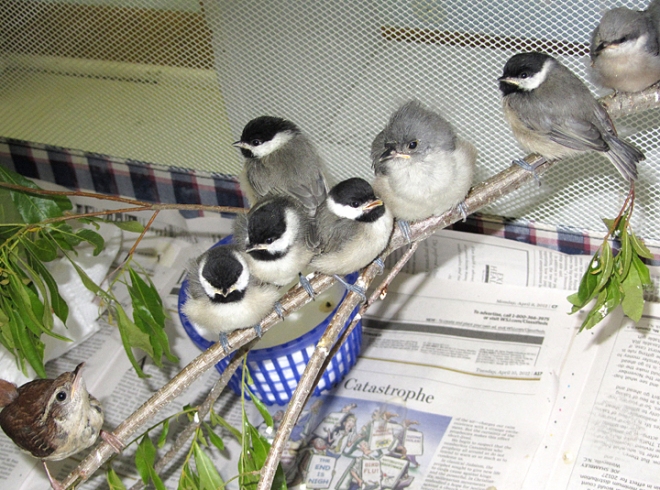 All the counter space, incubators and playpens are full of baby birds of all sizes and species in the infant nursery at the Outer Banks Wildlife Shelter in Newport. It’s Spring and everyone is doing what they do when the weather turns warm. Momma and Papa birds discovered safe and out of the way places to nest and raise their offspring, and humans are getting outside in the nice weather to plug holes in their siding, clean their soffit areas, mow the grass and remove dead or nuisance trees they feel are threatening their homes. And that’s when the conflict begins. Displaced nestlings are admitted to the shelter routinely because their parents chose a homestead not agreeable with the resident homeowners. Quite often we can convince the homeowners to wait only four weeks to make home repairs or take that tree down because the newborns will be fledging by then and on their way into big sky, but quite often, we can’t and agree to take in the newly orphaned. There are other instances when an onlooker sees what’s going on and rushes in to rescue the baby birds so they will not be harmed and delivers them to us to finish the job their dedicated bird parents started.
A few weeks ago, Black-capped Chickadee newborns were evicted by maintenance workers at an apartment complex much to the dismay of the residents, and the list of ousted baby birds begins. Nesting Starlings were removed from spaces created when a house lost siding during a storm and Carolina Wrens from a cozy squeeze of space on top a lawn mower after a snake tried to take out the whole wren family, but that was a necessary removal for the greater good. House Sparrows were extracted from a roof’s eaves, Robins and Mockingbirds from nests in bushes too close to the ground (homeowners worried about free-roaming cats) and Mourning Doves from a hanging plant above a deck. Occasionally flighty youngsters, such as our quivery Cardinal babies get too full of themselves and tumble out of the nest. In the cases of rambunctious little ones that stretch their stubby wings and lanky stick legs, then go “whoa – oops, where am I,” hopefully an empathic and sympathetic human comes along to help them out.

Unfortunately, most humans don’t know that they can put the infant back into the nest if found and still intact, and Mom will be happy her baby was returned. For many years, based on teachings as a child, I thought the mother bird would not accept the baby if it was touched by human hands; the scent would linger, and the baby would be rejected. The theory turned out not to be true. Other than the vulture, some seabirds and parrots, birds have little use for the sense of smell. Odors disperse in the wind quickly. They do possess olfactory glands, but they’re not well developed. Same goes for taste. Humans have nearly 9,000 taste buds, but songbirds have fewer than 50. Most backyard birds rely on sight, touch and hearing, which are senses that are highly developed. Okay, back to nesting; of course, trees are a very traditional choice for nesting, whether the nest is anchored in bobbing limbs or in a cavity, which is very popular for woodpeckers, flycatchers, nuthatches, screech owls and other omnivores. Recently, Tufted Titmice were admitted to the shelter after a tree was cut down. When you nest in a tree cavity, most of the time you won’t be noticed until after the tree is down (fortunately the babies survived the potentially hazardous thump). Nuthatches were also brought to the shelter about the same time for the same reason. Ideally for wildlife rehabilitators and the wildlife infants, no one would remove a tree until after “Baby Season,” but not everyone is aware of the consequences of tree removal until after the crisis presents itself. Then, based on the trauma incurred during the tree felling, it’s a 50-50 shot at a positive outcome. Luck definitely plays a card. Birds recognize no human presence, little activity and stillness as opportunity to nest, and they get busy doing what they do in the Spring before we do. So, we shouldn’t be surprised when we find a nest in our BBQ grill, on the boat, in a car that hasn’t been driven in a while, in signage at the store or in the cradle of a warm stop light. Birds have lost the majority of their habitat in urban and residential areas and are forced to adjust to our environment. They are doing the best they can.

We only ask that you be sensitive to these little feathered folks and give them the time needed to raise their young until they fledge, unless they are in a dangerous, life threatening situation. If that is the case, please bring them to a wildlife rehabilitator, and they will take it from there. We appreciate the caring, time and effort you give to bring in the little tweeters found in harm’s way.

Linda Bergman-Althouse
Author of
“Save Them All” (Amazon)