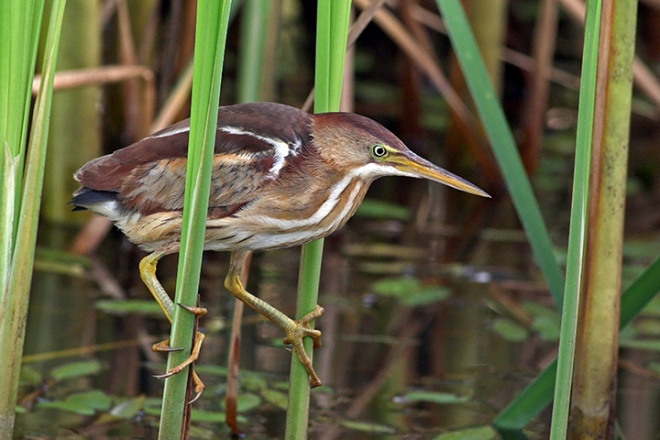 He must have looked like a statue in the backyard, with his beak pointed straight up to the sky, standing so still and if movement was occurring, it was imperceptible to humans. However, the cat knew he was there and pounced before the resident of the Atlantic Beach home could stop the attack. The gentleman quickly intervened and lifted the wisp of a marsh bird from the feline’s clutches. The Good Samaritan did not know how badly the bird was injured, but did know its best chance for survival after a cat attack would be in the hands and care of a wildlife rehabilitator. When admitted to the Outer Banks Wildlife Shelter in Newport, positive identification recorded him as a Least Bittern, which is a very elusive marsh bird and one of the smallest herons in the world, averaging 11 to 14 inches in length with a 16 to 18-inch wingspan. A full examination revealed one small puncture wound, and he was on the thin side, but he was still a lucky bird! Medications to prevent infection, getting him to eat in captivity and quiet for rest & recuperation became the treatment plan. Within three days, he was on his feet and eating mud minnows on his own from a bowl. Good Boy!

This small heron is adapted for life in dense marshes, but rather than wading in the shallows like most herons, the graceful Least Bittern climbs about in cattails and reeds, clinging to the stems with its long toes. Its narrow body allows it to slip through dense, tangled vegetation with ease. Thanks to its habit of perching among the reeds, the Least Bittern can feed from the surface of water that would be too deep for the wading strategy of other herons. Because of its habitat choice, it is often unseen until it flies. Although it is a rare sight to see, its cooing and clucking calls are frequently heard at dawn and dusk and sometimes at night. This primarily black and tan bird has a blackish-green crown and back, brown neck and brown and white underparts and a white throat. The Least Bittern is most readily identified in flight by conspicuous, chestnut-colored wing patches. Males are more colorful and have a darker back than females.

The yellow bill for both is thin and the toes at the end of their short green and yellow legs sport long, curved toenails that work perfectly for grasping dense vegetation. The plumage of juveniles is similar to an adult female but paler. This skinny bittern eats mostly small fish such as minnows, sunfish and perch and large insects to include dragonflies. If available, the Least Bittern will not pass on crayfish, leeches, frogs, tadpoles, salamanders, slugs, shrews or mice. To search for these tasty treats, the LB awkwardly moves about in vegetation above water and jabs downward with its long bill to capture prey at the water’s surface. It will also flick it’s wings open and shut to startle prey into motion. If the feeding site is good, the bittern has been known to build a hunting stand by bending down many reeds to form a platform. These birds nest in saltwater, brackish or freshwater marshes with dense vegetation from southern Canada to northern Argentina. The nest is a well-concealed platform built from cattails and other plants. Their nest usually presents as an elevated platform with an overhead canopy and is built of emergent aquatic vegetation and sticks. Least Bitterns are colonial nesters, and nests are usually widely scattered in the marsh and occasionally in close association with Boat-tailed Grackles. You may discover 15 LB nests in one breeding area! The female lays four or five eggs and in extreme cases, from two to seven. The eggs are pale blue or green and incubation is by both sexes for 17-20 days. After hatching, both parents feed the young by regurgitating food. Legs and feet of young LB’s develop quickly, and the youngsters may leave the nest as early as 6 days after hatching if the nest is disturbed, if not, they ordinarily remain in the nest for about 2 weeks, and near the nest for another week or more. Least Bitterns are known to produce one to two broods per year. 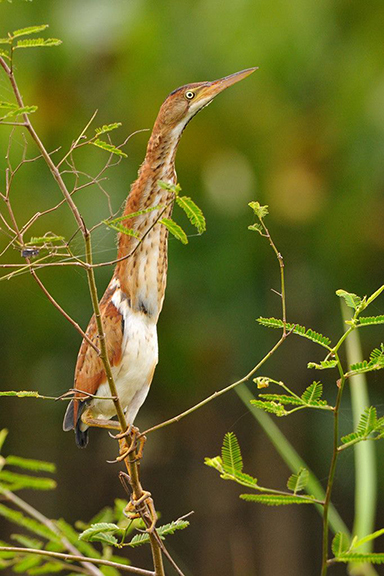 When threatened, the Least Bittern will freeze in place with its bill pointing up, turn its front and both eyes toward the source of alarm, and sometimes sway to resemble wind-blown marsh vegetation. This is believed to be a predator-avoidance behavior, since its diminutive size makes the bittern vulnerable to potential predators such as coyotes, foxes and the great horned owl. When alarmed, they may also puff out their feathers to make themselves look larger or burrow through dense undergrowth that is impossible for larger animals to pass through, and if those tactics don’t work, the shy and elusive bittern often slips away by inconspicuously walking or running through the reeds for they would rather escape on foot than fly anyway. Although considered weak fliers, Least Bitterns do migrate from the northern parts of their range in winter for the southernmost coasts of the United States and areas further south, travelling only at night. The population of these birds have declined in some areas due to loss of wetland habitat and the encroachment of exotic species of marsh vegetation.

The Least Bittern is listed as a threatened species at the state level due to the adverse effects of draining and the filling in of wetlands. Therefore, the North American Waterbird Conservation Plan rates it a Species of High Concern, and all migratory birds are protected under the Migratory Bird Treaty Act of 1918. Now that our bittern patient has passed live fishing school, he is ready to be wild again! We’re hoping he will rejoin his Atlantic Beach “dash or freeze or siege,” which are all names for a group of bitterns. Without the support of the people in our community, our Least Bittern release may never have been rescued, given the opportunity to recover and rejoin his flock. Dash On, LB!