Tiny but mighty is an accurate description of Carolina Wrens. We’ve admitted a ton of these little flyers this baby season at the Outer Banks Wildlife Shelter in Newport, and if there is one bird we wildlife rehabilitators need to up our athleticism with, it’s the Carolina Wren. They may be some of the smallest, featherless, blind and helpless babies when they arrive in the nursery, but they develop quickly and become fast and furious. Carolina Wrens don’t need much of an opening to dart out of a playpen after graduating from the incubator, and they will capitalize on any opportunity. Then, the dance begins. They are faster than we are, more agile and very good at hiding in the slimmest of crevices. They don’t make it easy on us like our heavier Robin or Blue Jay babies who sit in the open after trying their wings and wait for the human pickup and return drill. Sometimes it takes hours to find an escaped, cinnamon colored Carolina Wren who is quick to give us a grumpy ‘keep your distance’ look while squinting those big round eyes adorned with a white brow stripe. Seasoned rehabilitators have developed some pretty quick dance moves to ensure any possible escape is thwarted thereby preventing those long, unwanted searches. This small but chunky bird with a round body, very little neck and long tail that is snootily cocked upward can deliver an amazing number of decibels for its size. When they are hungry, we know it. They are loud! But if they don’t want to be found, you won’t hear a peep. These babies grow into adulthood within 4 weeks of birth, weighing only .6 to .8 ounces with a length measurement of 4 to 5.5 inches. So basically, they still look like babies, but they are extremely competent, diligent and capable. Their wingspan is around 11 inches. When the babies are 12 to 14 days old in the wild, they leave the nest, but their parents still feed them for another couple weeks. 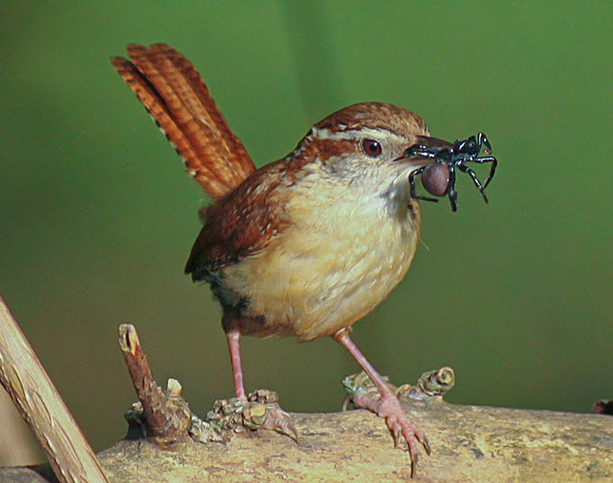 Insects and spiders make up the bulk of a Carolina Wren’s diet, so they put away a huge amount of mealworms at the shelter while they grow in our care. Common foods in the wild include caterpillars, moths, stick bugs, leafhoppers, beetles, grasshoppers, crickets and cockroaches. Their bill is pointed and curved, which is engineered perfectly to turn over decaying vegetation and to hammer and shake apart large bugs. Carolina Wrens will occasionally eat lizards, frogs or small snakes. They also consume a small amount of plant matter, such as fruit pulp and poison ivy. They move into shrubby, wooded residential areas, overgrown farmland, dilapidated buildings and brushy suburban yards. Unlike migratory birds, Carolina Wrens stay in their chosen territory year round. Male and female Carolina Wrens build their nest together. Pairs mate for life and will usually remain in each other’s company all year long. Their bulky 3 to 9 inches long and 3 to 6 inches wide nest is cup-shaped, usually domed, with a side entrance and often a woven extension resembling a porch or entrance ramp. It’s loosely constructed with a variety of materials such as bark strips, dried grasses, dead leaves, moss, pine needles, hair, feathers, straw, shed snakeskin, paper and even plastic or string, in which the latter two are not safe nesting materials. The female lines the nest’s inner bowl with the comfiest of her chosen nest components and may add more elements after incubation begins. The nest they build is grand and accommodates 4 to 7 eggs, white with brown speckles, which are incubated for 12 to 16 days and ultimately, their rambunctious nestlings as well. So lack of quality nest structure is not the reason why our shelter ends up with so many Carolina Wrens every year. It’s WHERE they build a nest that becomes problematic, which could be anywhere!!! They build in flowerpots, mailboxes, propane-tank covers, door wreaths, old coat pockets (or even a pocket in clothing hanging on the line), boots, garage door openers, on lawn mowers (if they have been sitting too long), helmets, cinder blocks and vents on a boat. Anywhere a cavity can accommodate them, they move in. When calls to the shelter begin with “I have a nest of wrens in my hanging plant or under the rake in my wheel barrel,” we always advise the caller to wait them out if possible. The wrens will be on their way in just a few weeks, and you will have enjoyed the privilege of hosting a family of bug zapping environmental partners. This year, a Carolina Wren family nested in this author’s kayak. 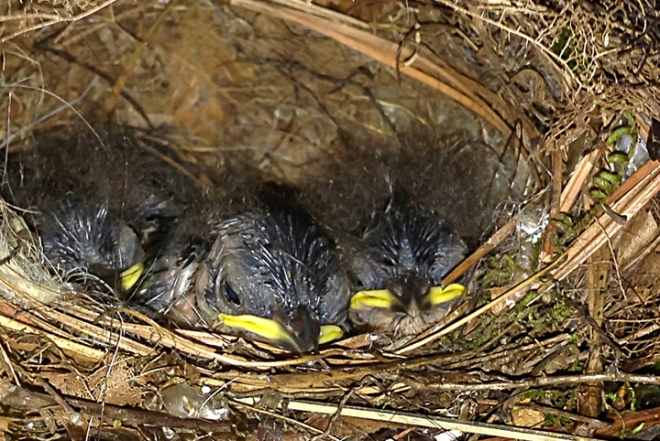 Four little ones were discovered while Momma and Daddy Wrens looked on from the fence. The decision was made to land lock the boat until the wren children fledged! They are still seen flitting around the yard together defending their territory by aggressively scolding and chasing off intruders. Besides vigilantly standing guard and being the first birds to send up the alarm with chidingly shrill notes when a predator is in the area, Carolina Wrens also love to sing happy songs. Males and females are constantly vocalizing, however males only will produce the creation of song, singing rain or shine from dawn to dusk and up to 3,000 times a day. So, as long as they are singing the songs, let’s take time to do the happy dance with them (it just might be the most enjoyable part of your day)!!

best always and keep on dancin’!